Schizophrenia is a terrible disease. Its symptoms can include delusions, hallucinations, and amnesia. Schizophrenia affects 1.1% of the population, and 10% of persons with schizophrenia will take their own life.

Current treatments for schizophrenia are less than ideal. There is no cure, and the best we can do is treat symptoms. Current treatments, like modern anti-psychotics blunt experience, and come with a host of terrible side effects. Medication adherence is poor, and antipsychotics slowly destroy your brain.

Efforts to  find a “cure” for schizophrenia have been unsuccessful, but a potential avenue has opened up which I believe is very important. I have come across two cases of people suffering from schizophrenia experiencing a very significant reduction in symptoms-enough that both patients could lead a normal life. Both of these patients underwent bone marrow transplants (BMT) for blood cancer.

It is important to note, that so far, N=3, but the effect size is massive, suggesting that this needs to be studied further.

I have put together a review of the current literature available, and summarized the key points. Included are some concluding remarks, next steps, and important patterns I have noticed as well.

The first case study I found was the case of a 24 year old man in Japan. He led a fairly normal life, had normal social skills, graduated from college, and worked at a corporation for a living. At 23 years old, he began to experience insomnia, irritability and anxiety. He also began to experience persecutory delusions, paranoid ideation, and spoke incoherently. He was diagnosed as suffering from “paranoid schizophrenia.” He was treated with the antipsychotic Quetiapine (300 mg/day) a common antipsychotic, but it seemed to have no effect, and his auditory hallucinations, social avoidance, persecutory delusions, and suspiciousness continued to progress. He was subsequently given Risperidone (12mg/day) and Olanzapine (20 mg/day). His condition did not improve at all, and his social function continued to deteriorate. He was diagnosed with “treatment-resistant schizophrenia.”

When the man was 24 years old, he was diagnosed with acute myeloid leukemia.  He experienced tiredness, his gums bled, and he suffered from pain in his joints. They determined he was a good candidate for BMT.  The man underwent an allogenic (from another person) Bone Marrow Transplant, and 30 days later, his psychotic symptoms had almost disappeared, without the administration of any neuroleptic treatment. 8 years after his BMT, there are no residual psychiatric symptoms, and his social functioning has gotten drastically better.

Graph showing tha patients drastic reduction in PANSS. PANSS stands for positive and negative syndrome scale. It is used to note the severity of the symptoms of schizophrenia.

The second case study I found was a 21-year-old male in Mexico. He was diagnosed at age 15 with schizophrenia. He was suspicious, socially withdrawn, and suffered from auditory hallucinations. His symptoms were so severe, he was forced to drop out of high school, and only left the house for therapy. He was prescribed Risperidone (4mg/day) and Olanzapine (10mg/day) without success.

One year after his diagnosis of schizophrenia, he was diagnosed with Hodgkin’s Lymphoma. He received a series of three bone marrow transplants. The patient underwent an autologous BMT, but three months later relapsed. He received another autologous (from himself) BMT, and relapsed a second time. He finally received an allogenic (from another person) BMT, and the treatment for Hodgkins Lymphoma was successful. After his first BMT, his PANSS dropped from 147, to 89.

Graph showing tha patients drastic reduction in PANSS. PANSS stands for positive and negative syndrome scale. It is used to note the severity of the symptoms of schizophrenia.

(IE Sommer 2015) found a third case study that is of particular interest. It comes from a 67 year old retired man. He was married, had two adult children, and had a blank psychiatric history. He was diagnosed with lymphocytic leukemia, and bone marrow aplasia. He received chemotherapy, and an allogeneic BMT from one of his brothers. His brother had schizophrenia since early adulthood, and required treatment with multiple antipsychotics. Approximately five months after his BMT, he began to develop frequent hallucinations, delusions, and he was angry with a flat affect. He developed homicidal and suicidal ideation, and was admitted to a psychiatric clinic. He was given an MRI, a neurological evaluation and electroencephalography-it all revealed no abnormalities. He suffered from no metabolic disorders, or underlying infections. He was treated with risperidone 3mg/day, and Citalopram 20mg/day, but it did not work. He was given haloperidol 1mg, which did not help either.

The adoptive transfer of schizophrenia is a likely description of what happened, even though the patient was never formally diagnosed due to his advanced age, and its proximity to his BMT.

An analysis using a payer database:

(Galop 2020) took a novel approach to determine whether or not BMT had an effect on patients suffering from psychiatric diagnoses. Galop measured the utilization of psychiatric medication before, and after a BMT as a proxy to determine whether or not there was a reduction in symptoms. Galop then gathered a database of anonymized patient data, the Truven MarketScan data, which included data on 8,233 patients that had undergone an Allogeneic BMT.

Medication Possession Ratio, or MPR, defined as the sum of the days’ supply for all fills of a given drug in a particular time period, divided by the number of days in the time period.

For antipsychotic medications, the sample size was 70 patients who had been prescribed antipsychotics. MPR Prescriptions dropped from 1195 to 895, a reduction of 25.1%. 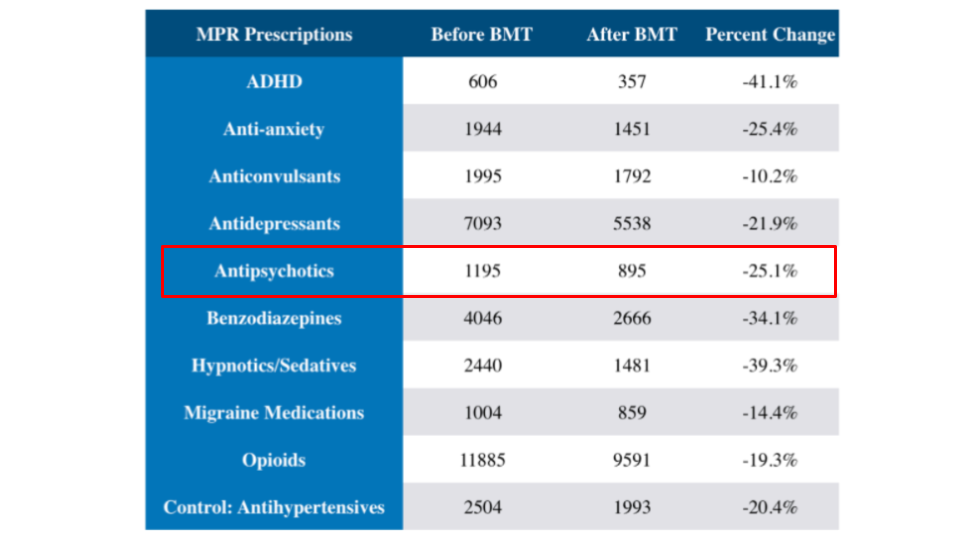 MPR prescriptions for Antipsychotics dropped 25.1% post BMT. Thanks to (Gallop 2020) for the chart, emphasis added by me.

PDC prescriptions for Antipsychotics dropped 22.6% post BMT. Thanks to (Gallop 2020) for the chart, emphasis added by me.

Some limitations that Galop explicitly acknowledges: if you need a BMT, you are suffering from generally poor health, and you may end up feeling a lot better because your underlying disease has been treated, not your Schizophrenia. Additionally, the study included a range of defined psychiatric conditions, not just schizophrenia. I plan to pull out the patients afflicted with Schizophrenia, and run through the data as well in a more targeted manner.

After having gathered the current evidence, I think it is likely that a certain percentage (perhaps as high as 30-40%) of individuals suffering from schizophrenia could be treated with BMT in order to provide a substantial reduction in symptoms.

Some limitations-this is all observational, it could be that each individual’s underlying schizophrenia condition was actually some weird symptom related to their blood cancer. I think the third case study, of the 67 year old man developing what appears to be schizophrenia after a bone marrow transplant provides some amount of evidence against this thought.

Although this is just two case studies, along with the prescription reduction Brittany observed in her data analysis, I think there is enough evidence that this needs to be studied further as a potential treatment for schizophrenia. Currently, BMT mortality rates have dropped to about 10%, and in a fashion similar to Moore’s law for computer chips, seem to be getting better over time at a fast clip. This mortality rate is also in the context of patients suffering from a severe illness (you only get a BMT if you have blood cancer!), suggesting that soon, we will be able to use this treatment more widely. In fact, there have already been people treated with BMT for diseases such as Crohn’s disease. I also have my suspicions that, barring graft vs host disease, cleanliness probably could be improved, and easy gains made in ways similar to this.